I did this the last 6 months for a lot of reasons, the main one being, I was bored and wanted to play with doing a kind of garden installation, the kind you don’t see at the Chelsea Flower show.

Not that I am saying I will never do a garden art installation there but right now, I just want to play with it in my own time and space.

On top of that it was a way to make new friends, give something uplifting to an otherwise deprived area and to stop any attempt by unscrupulous developers from appropriating the space on the grounds that it is unfashionable and only old people use it.

Allotmenteering is very trendy at the moment, for 2013. Many younger types are going for that. Maybe for entertainment, maybe to feel a bit more eco-friendly.

The fact is most of the younger Allotmenteers have no idea what they are doing. We were lucky because we have a few Scandinavians who grew up on farms so they know how to really grow edible things.

I, on the other hand, only grew things on hobby farms so making it look pretty was a natural reaction.

So far, so good, our skills complement one another. It is a Win-Win.

What is an Allotment?

An allotment garden (British English), often called simply an allotment, or a community garden (North America) is a plot of land made available for individual, non-commercial gardening.

Such plots are formed by subdividing a piece of land into a few or up to several hundreds of land parcels that are assigned to individuals or families.

Such parcels are cultivated individually, contrary to other community garden types where the entire area is tended collectively by a group of people.

In countries that do not use the termallotment (garden), a community garden can refer to individual small garden plots as well as to a single, large piece of land gardened collectively by a group of people.

The term victory garden is also still sometimes used, especially when a community garden dates back to World War II or I.

The individual size of a parcel generally ranges between 50 and 400 square metres, and often the plots include a shed for tools and shelter.

The individual gardeners are usually organised in an allotment association, which leases the land from an owner who may be a public, private or ecclesiastical entity, and who usually stipulates that it be only used for gardening (i.e. growing vegetables, fruits and flowers), but not for residential purposes (this is usually also required by zoning laws).

The gardeners have to pay a small membership fee to the association, and have to abide by the corresponding constitution and by-laws. However, the membership entitles them to certain democratic rights.

What is it good for? (According to the French!)

From Cecilia: Unfortunately, with the way our green developers acquired the allotment for all residence at the green co-op we might all like to buy into, our approach to the Urban Gardening Project resembled the Swedish version.

There were clashes of the socio-economic kind. I suspect the introduction of the caterers into a “Gardening day at the Allotment” aka PR Photo opportunity with the inhouse chef might not be to everyone’s liking.

I know …not everyone wants a Vegan option to their corporate Big Lunch BBQ ! lol. oops!

Well sorry there were evil vandals who burnt down the buttercup yellow shed…..but so far, since I put in the graffiti-influenced art flowerbeds, no one has touched our plot….I have no idea why but I am very happy about it and it is not even a Team Robbo and Yu collaboration ! 🙂 hahaha. (Joke.)

This is the Swedish version of what is an allotment: 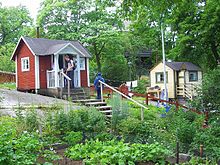 In 1895, the first allotment garden of Sweden was established in Malmö, followed byStockholm in 1904.

The local authorities were inspired by Anna Lindhagen, a social-democratic leader and a woman in the upper ranks of society, who visited allotment gardens in Copenhagen and was delighted by them.

In her first book on the topic devoted to the usefulness of allotment gardens she wrote:

For the family, the plot of land is a uniting bond, where all family members can meet in shared work and leisure. The family father, tired with the cramped space at home, may rejoice in taking care of his family in the open air, and feel responsible if the little plot of earth bestows a very special interest upon life.

Anna Lindhagen is said to have met Lenin when he passed through Stockholm from the exile in Switzerland on their return trip to Russia after the February Revolution in 1917.

She invited him to the allotment gardens of “Barnangen” to show all its benefits. However, she did not win his approval. Lenin was totally unresponsive to this kind of activity.

To poke in the soil was to prepare the ground for political laziness in the class struggle. The workers should not be occupied with gardening, they should rather devote themselves to the proletarian revolution.

***Note from Cecilia: Chi Seen! As if anyone gives a rat’s arse about what Lenin thought of anything. If they spent a little bit more time learning about growing food, Lenin (or whatever his name was) and his pathetic little commie mates (who was the one who got picked to death by an ice-pick! Bravo…should have done it to all of them!) would probably manage to be less theoretical about this thing called “FEEDING YOURSELVES” and gee, maybe these commie losers could refrain from starving 45million people!

I do not know why it is always the passtime of the “bored and the wealthy” to go through a Croissant Communism phase….even yours truly….ME, went through that for …oh, about 20sec……though I am not particularly bored, nor obscenely wealthy…hahaha…that probably explained why I never gave a rat’s arse about communism…

….it was more like…”Oh, Gosh, here’s a weird thing called a communist, and it says his daddy was in some sort of army….and at least it is entertaining….lets have dinner with it and see what the thing will say….lol.” (ah, cheer up…if your little commie spies read this out to you….at least you learnt how to eat a lobster pasta to perfection…thanks to “Cecilia’s expert social etiquette lessons for the modern day commies!” LMAO. it’s a joke!)

Luckily it only takes meeting them ONCE to realise how nuts they are and by then, you’ve moved onto something else….like I don’t know….Crystal Gazing or Raw Food Diet! 🙂

The Swedish Federation of Leisure Gardening was founded in 1921 and represents today more than 26,000 allotment and leisure gardeners. The members are organised in about 275 local societies all over Sweden. The land is usually rented from the local authorities.