Hello Family, Friends and fellow Netizens who #StandwithFreedom
Last weekend I was invited to a Rangers fc and Liverpool fc Legends Charity match in Scotland. So you finally got your wish, I am finally writing about sports for the first time ever! See, all your nagging paid off!
Thanks to China Communist Party, being such a terrible bad sports, the issue of Hong Kong became a champion of Freedom of expression but hopefully we have not been co-oped by NBA into its version of “Greed is Good” capitalism yet….though arguably Hong Kong itself exist as the trophy case for “Winner takes all” in its skyline of “Whose giant phallic symbol is this commercial building anyway?”.

Nevertheless we managed to instill a love of freedom in spite of Hong Kong’s blatant love affair with Commerce in all its forms.
Like many commodities found on the silk roads, football is fun. The media talked about the legends game a lot.
My first Live soccer match ….so fun. I enjoyed how civilized and laid back it was..
I wore my Hong Kong flag pin and my Marie Curie Cancer Research Charity Yellow Daffodil Pins, supporting of ETHICAL Sportsmanship and Freedom of Expression in Sports and the Arts.
It was an unusually sunny day. Everyone had a good time. There was not any of the usual  “angry fans” issues associated with a “rough crowd” soccer match. So basically no one stabbed anybody….lol. 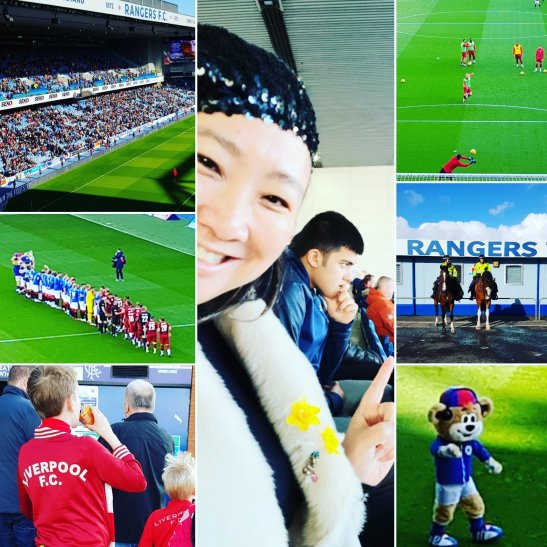 The official sponsor for Liverpool fc was their Bespoke Tailor in Liverpool and a Tech repair company sponsored Rangers fc. They deliberately kept it low-key for a more glocal theme as the money raised for the day will go to their charity foundations to provide sports and community activities for boys and girls living in the poorest slum areas.
It was a day celebrating ethical sportsmanship and friendship between the legends former team mates.
We enjoyed attending after a lovely Brunch of Vegan Berries pancakes and Soya Chai Latte.
My only concern was the  quality and price of the junk food in the sports stadium. A lot of independent Scottish Green MP had raised concerns about it. I tried an Ibrox hot dog and saw that many outlets were “sold out” while the healthy choice van in the family area seemed quite empty. Okay, so organic lentil soup was not a crowd favorite. But that Ibrox hot dog I had was Disgusting!
The two Muslim Scottish teenagers (nephews of a friend of mine working for the Rangers charity Foundation) enjoyed all the pies and  junk food because it was hallal and fun. It makes me question,” If you can get the food hallal AND kosher, why can’t you get it to BE Real Food?” 🙂 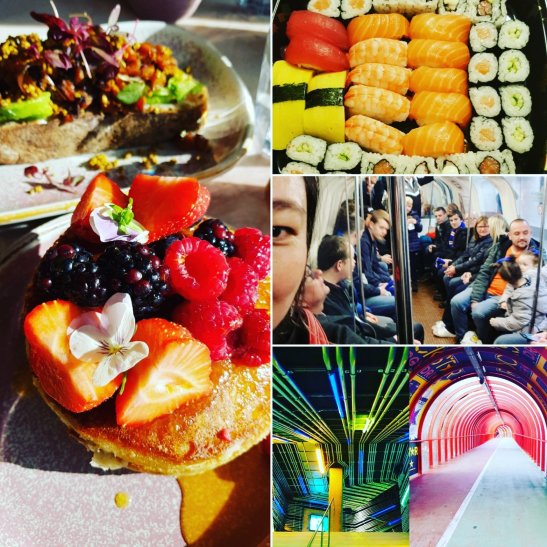 In short, with the NBA fight with Communist China (which is showing out to be just another branding opportunity in hyper-reality), all I can say on a personal level is,”Sport like the Arts promote freedom of expression. I can’t imagine a game like this being hijacked by a government  to dictate policies to the masses. But that was what happened for the LA Lakers and Brooklyn Nets in Shenzhen. No such problem for Liverpool and Rangers. So they sold me an overpriced horrible hot dog, I had a choice! I didn’t have to bite! “
That is the intangible difference on an experiential level, between Democracy and Communism. 🤣
Glory to Hong Kong, May Freedom return to Hong Kong!

️
I think of all the Graffiti Protest Art Monkey boys and girls arrested in the last few months on the streets of Hong Kong. They are not treated as young kids and teenagers protesting in a Democracy. They are treated badly as Communist China political prisoners by Hong Kong Police. RIP to poor 15 yrs old Christy Chan whose naked body was found dumped in Hong Kong harbor along with 160 other incidents of inexplicable “Floating corpse”.
I think ultimately it is the Beijing Administration and its appointed Chief Executive Carrie Lam’s responsibility if ANY teenage protesters are harmed in any way. At the very least, Hong Kong Police were excessive in its use of force and failed to observe “due process” on many occasions documented by Amnesty International. Many young protesters are still detained on minor charges.
To borrow from the Graffiti NYC prima donna Kel1st : “Let them Free! It is time!”
Yes..it is indeed. But I don’t think Ted Cruz, dubbed the “Vaseline-d Serpent” by insightful Washington watchers from.the New York Times, who decided to visit  Hong Kong,  is quite the creature for the Job. Seriously! #asif

Cecilia xo
P.S There was a Paparazzi photo shoot stunt with David Beckham downstairs at the K1Yu art studio, probably done for tourism purpose, as he is not Ranger or Liverpool NOR is he a Manchester United legend for the purpose of the Legends Game. So, much like Ted, nobody knows why he was around at all?

Last-minute update: A Norwegian Lawmaker Guri.Melby stated: “I have nominated the people of Hong Kong, who risk their lives and security every day to stand up for freedom of speech and basic democracy, to the Nobel Peace Prize for 2020. I hope this will be further encouragement to the movement. #standwithHongKong”

Oh well, it is a nice gesture…I supposed …though it is very worrying what happens to Nobel Peace prize winner of the Chinese persuasion ( #FreeLIuXiaobo and all that, RIP)…..lets hope Hong Kong does not win. Lol. #sarcasm
Anyway! Yay to LIverpool fc! Yay to Rangers fc! Yay FootBall! (wait for something to scream….” Don’t call it #Soccer!”